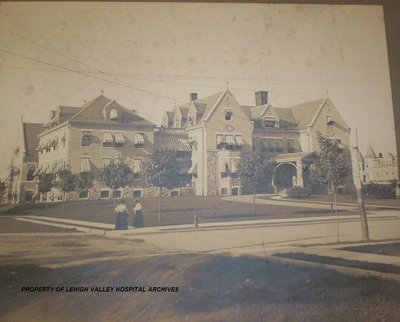 Black and white photo of the first Allentown Hospital.

Opening day of the 30-bed hospital was May 22, 1899. Twenty-three ward beds, two cribs, five private rooms, a bed in the receiving ward, one operating room and living accommodations for a dozen employees were available. Luckily, with the community's help and gifts from many local businesses and fund raisers, the hospital; which had cost $5,297.51 for land, $20,243.63 for the building and $3,856.36 for furnishings and supplies, opened totally debt free.

The gifts and donations from many people and businesses made all this possible. Silverware was donated by a jeweler; a crockery company gave all the dishes; grocers gave food; one lady donated a dining table and chairs; the Ladies Auxiliary gave $800 and several physicians gave $100 each. The list of donations goes on and on, in fact, covering six pages of a typed report.

The Morning Call reported on the opening of the hospital:
"The doors of the Allentown Hospital were opened yesterday and
quite a large number of visitors were there to inspect the building.
There were good words spoken on all sides and the Hospital when
fully completed will compare with any of its size in the state..."

After completing one year of service, the trustees already realized the hospital would have to expand. A committee was formed consisting of: Judge Harvey, Dr. C.D. Schaeffer and Treasurer E.H. Reninger to study the idea of erecting the first of two wings proposed in the initial design. Funding was gratefully accepted from James K. Mosser, a trustee, who pledged to finance the entire cost. After studying proposals, construction began at a cost of $39,773 and was completed in June, 1902.
This new construction added an additional forty-five beds and provided rooms for the student nurses that entered the School of Nursing that had opened in November of 1899.

COPYRIGHT INFORMATION ~ When using this image, the credit information should be in the following format: Image courtesy of Lehigh Valley Health Network