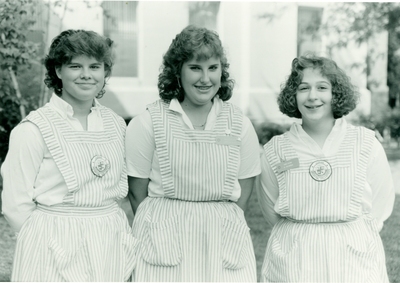 Junior volunteers receiving special recognition at the annual awards ceremony were: (left to right) Leah Heller, Andrea Hoch and Cindy Kuzma. Heller earned a 500-hour pin, while Hoch and Kuzma each received a candystriper pin for 250 hours of service.

The Allentown Hospital held an awards ceremony to honor 65 junior volunteers, representing eight area schools, who worked over 6,000 hours this summer. Theirtime translates into a Hospital savings of $21,000.

The ceremony honored those junior volunteers who have given 50, 75, 250 and 500 hours of service throughout the year.

Kramer, director of Volunteer Services. Their tasks include discharging patients, delivering flowers and mail, providing fresh water for patients, and running miscellaneous errands to the Hospital Pharmacy and Library.

"They help cheer up a lot of patients," said Kramer. "For many patients, interaction with junior volunteers helped the time pass more quickly."

Fifty-six junior volunteers who served 75 hours received a certificate and an emblem to sew on the front of their volunteer uniforms. Seven volunteers were awarded certificates in recognition of 50 hours of service. The volunteer program gives teenagers between the ages of 13 and 17 the background they need in order to decide if they wish to pursue a health-related career.

"It's an important step. They can decide if they want to work in a hospital, particularly nursing, as a lab technician, or in some other capacity," Kramer said.

A "Make Your Own Sundae" party followed the ceremony.

COPYRIGHT INFORMATION ~ When using this image, the credit information should be in the following format: Image courtesy of Lehigh Valley Health Network.