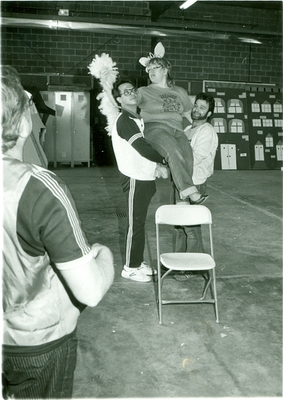 Richard Cipoletti (left), The woman being lifted up is Jeanne Fignar, and Mike Spleen (her right). rehearsal of valley Fever, at the Lehigh Valley Hospital Center 10th Anniversary. rehearsals were held in the old helicopter hangar which stood where the Kasych Pavillion was later buil.

INFORMATION ~ When using this image, the credit information should be in the following format: Image courtesy of Lehigh Valley Health Network.